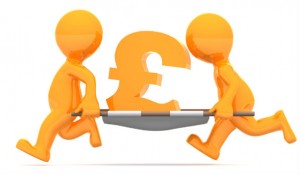 The increased fees had been been proposed but it was only the week before the came into action, that the introduction was confirmed. It will no doubt have resulted in many people issuing claims earlier than the might otherwise, to avoid paying the increased fees.

The court issue fees for small claims are unchanged but claims of a value greater than £10,000 have suffered a huge increase. For claims over £10,000 the court issue fee is now calculated as 5% of the sum claimed. At the lower end of the scale, it might not make much difference but for higher value claims it makes starting a claim cost several thousands of pounds more.

The largest court fee chargeable will be capped at £10,000.

Here are a few projections which show the wide swing:

The only reason the 5% principle is not being used for claims of a value less than £10,000, is because it would make the fees cheaper than they already are. The government certainly wouldn’t want that!

Court Fee Increases – What We Think At SV Legal Training

The last round of court fee increases was only in April 2014. It is far too soon for more increases.

The government has pulled a huge amount of resources away from the civil court system, most notably by drastically reducing the eligibility of legal aid in family work. It now uses the court system as a cash cow to generate income. We are not aware that the extra revenue received from the increased court fees, will result in extra funds for the court systems and processes.

The government has not adopted a balanced approach. Give and take is required. It is however, all take and no give. It is only time until the increased pressure the courts come under cause serious implications on access to justice. Judges are already complaining about the number of litigants in person appearing before them at hearings, not preparing properly or simply getting things wrong. Not having lawyers appearing at hearings, makes the lives of Judges and court staff much more difficult.

An increase in fees will have an impact on whether people issue a claim or find the courts as accessible. It is inevitable that some people will be priced out of litigation or it will decide it is disproportionate to litigate at all.

We think it is likely that parties in dispute are more likely to consider other options before going to court, such as mediation or other ADR.

You can read more at the government website here.